THE ONLINE MAGAZINE WHERE LONDON ARTISTS AND ARTISANS REVEAL THEMSELVES

How do you reconcile a very intellectual upbringing with the urge to create things with your own hands? Deborah Sandersley seems to have found the best of both worlds by working with glass:
the erratic nature of this liquid/solid is both chemically and aesthetically fascinating. Unpredictable, one can never quite tell how the alchemy will turn out once the piece comes out of the kiln. This complex, multifaceted material continues to intrigue her and to keep her on her toes. 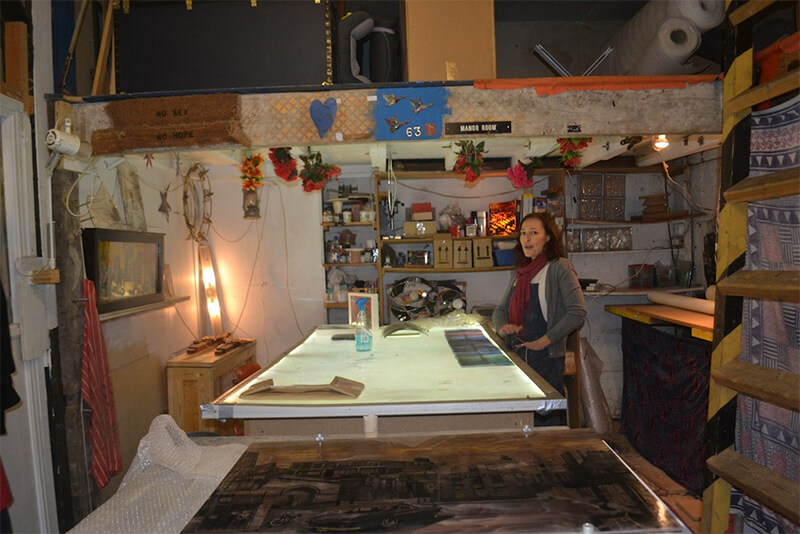 Deborah’s beautifully emotive glass panels are made of juxtaposed archive pictures or personal photos that are Photoshopped and then screen printed with glass enamels that she fires onto the glass. Then, she etches and sometimes hand colours them depending on the effect she wants to achieve. With Photoshop, she can play with scale and proportion and with the etching, she can solidify or leave transparent some specific areas. Although in her past life, as a photographer, she sometimes shot in colour, all her reportage were in black-and-white. So even now, she only uses black-and-white photos for her art pieces. The colour comes from the coloured glass which is used as the background. She also uses colour to highlight a specific area or to draw attention to details within the piece. Every photograph and every layer in her composition reflects a stratum of Deborah’s life journey and her exploration of London and its various boroughs. The ensemble pieces convey, each time, a unique and striking mood. 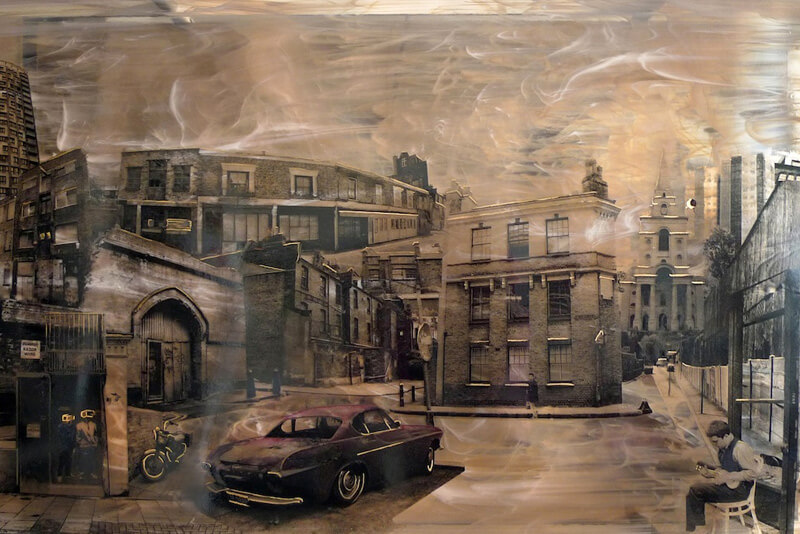 Back in the late ’80s, living a bohemian life amongst struggling musicians and artists in Old Street, Deborah stumbled across photography. Soon enough, she became a photography assistant practising her craft in the midst of a joyous and creative crowd. She encountered and learnt from the best photographers such asSebastiaò Salgado and Tom Hunter before they made a name for themselves. Other photographers’ work (Eve Arnold, Don McCullin, Brassaï) made a lasting impression on her and the fact that Eve Arnold was one of the first women photographers at theMagnum Agency at a time when it was a very male dominated profession particularly resonated with Deborah. But it is theClaremont Road M11 Link protest in 1994 that acted as a trigger and set her on a course that defined the way she envisioned photography from then on. 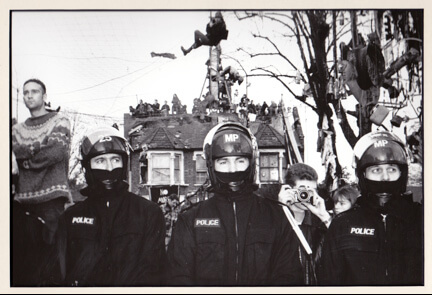 Indeed, by the mid-’90s, Deborah was working freelance assisting photographers.The M11 Link Road protest had been an on/off controversial subject documented in the press for quite a while.
All of a sudden, protests increased and reached a peak with the tragic episode of the eviction of Claremont Road’s residents. Deborah, deeply moved by what was happening around her, felt an urge to document it. So, she mingled with the locals who were evicted by force, sympathised with their plight and took hundreds of pictures. There, she also met Rita Chadah of Newham Community Heritage. Together, they worked on her first exhibition about homelessness in the borough called “Home is where the art is” in August 1996.

Other collaborations with the music industry (Decca Records) and other publications (Time Out, The Big Issue) followed suit. But her collaborations and strong ties with Newham Community Heritage continued for many years. The Claremont Road eviction made Deborah realise what mattered to her: life and people in real life situations away from the glossy fashion pictures void of emotion or depth. So, life in her community and the social subjects that popped up as she walked the streets of East London were her everyday focus and subject of her photography. One of her ongoing projects was looking at alternative lifestyles/housing in East London. 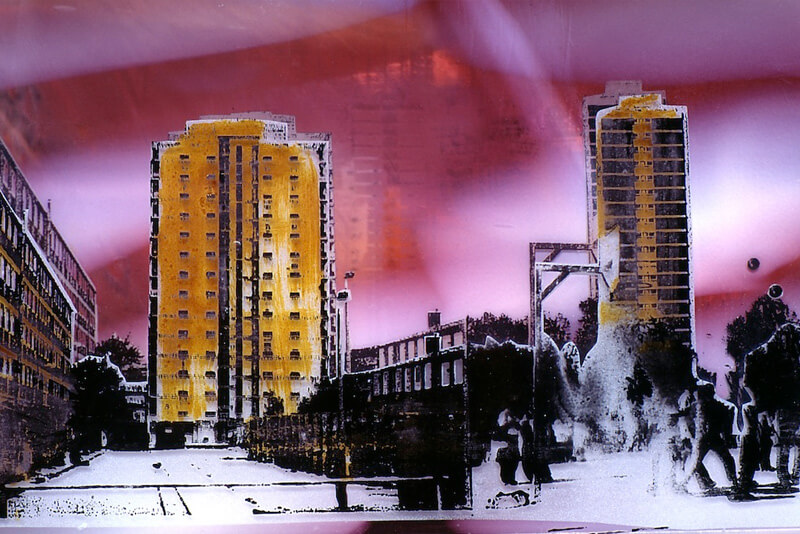 Being, however, a sensitive person, Deborah couldn’t easily extract herself from her subject matter. After a while, taking pictures of people in disarray or in dire straits was taxing. She recalls once asking Sebastiaò Salgado how he could shoot such misery without feeling somewhat involved and he replied that he observed humans just like any other animal species. But Deborah couldn’t keep that distance. About the same time, she moved to Brick Lane and realised that the area was changing fast and that the rapid gentrification of the neighbourhood meant that the East of London was in for a major make-over. Having always been fascinated by architecture, she felt a need to visually document an area that was literarily disappearing in front of her eyes and to capture those buildings on film as a tribute.

Thus, she gradually switched from portrait photographs to taking pictures of derelict buildings which was, emotionally speaking, a salutary move. It is about that time that she met Jill Dejong who taught her the basics of working with glass. It turned out to be a newfound passion and with the digital photography revolution well on its way (less hands-on manipulation and more computer-based work) she decided on a new career path and took glass classes at Westminster Adult Education Services and then at Central Saint Martins School of Art and Design where she graduated in Glass and Fine Art and Glass and Architecture. 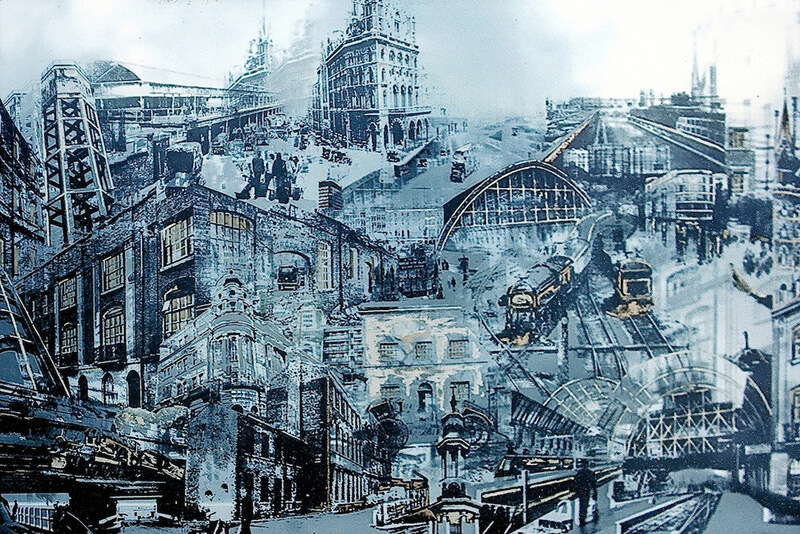 These days, Deborah Sandersley divides her time between Lead and Light Studios where she works as principal designer/cutter, and her own workshop in East London undertaking private commissions (Starbucks on Kings Cross, Hotel Murano, …) or working on her own creations. Whenever she finds the time, she visits established galleries such as The Whitechapel Gallery, The Barbican, The Hayward Gallery and, in her neighbourhood, she enjoys visiting the pop up galleries that have sprouted in disused places and that have become very popular round there. Flowers East is part of her regular rounds.

In terms of actual photographers, she likes the work of Richard Billingham, Nan Golding and Adam Wiseman. As for galleries exhibiting glass work, she laments the fact that most of them show mostly blown and cast pieces. But in that respect, she very much admires David Rieekie‘s work that has been shown in Biot, France at the Galerie Internationale du Verre which is one of her favourite hang-outs when she is in that part of the world.

Coming from a cosmopolitan background (Romanian-Hungarian father and Italian-American mother) Deborah considers herself a true Londoner and could not, by her own account, live anywhere but here. She feels particularly at home in the East where the presence of fellow artisans are kindred spirits who feed her creatively. From the metal worker to the woodworker, every day, these artisans perform the age old gestures that perpetuate the traditions of their crafts. But in the face of rampant real estate development and the gentrification of the East of London that goes with it, she wonders wistfully how much longer this fragile equilibrium will last.